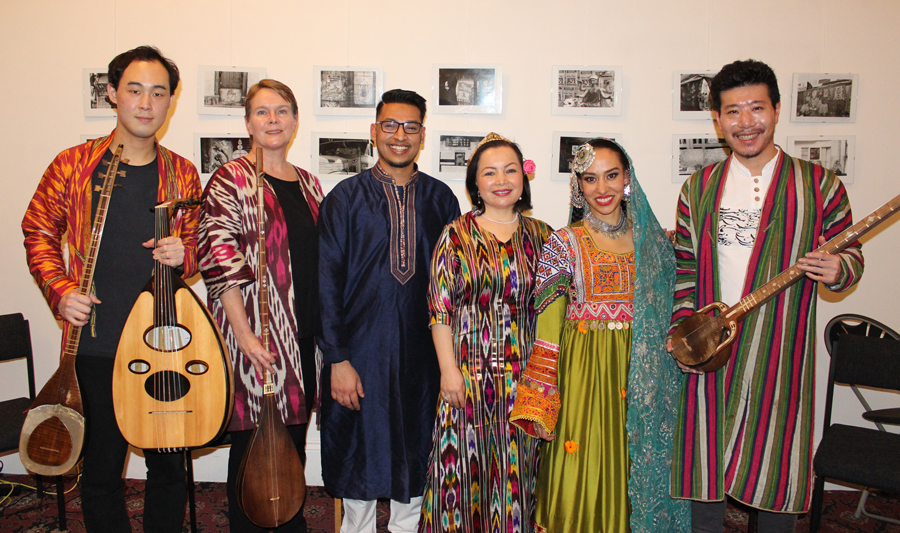 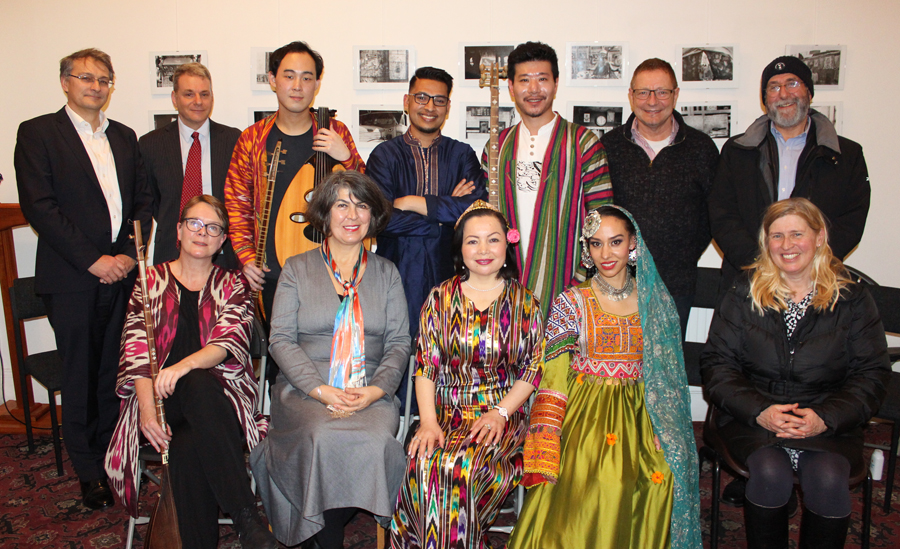 Members of the SOAS Silk Road Collective after the concert and also with friends.

1- When was the SOAS Silk Road Collective founded and who was the brain-child behind it?

A small group of us here in London, including our singer Rahima and myself, have been playing the music of the Uyghurs for quite a few years. Rahima comes from a Uyghur family with a strong musical tradition, and she’s kept that alive in the UK. In 2018 we got together with a group of talented students at SOAS who played a range of Silk Road instruments and styles, from Iran to Afghanistan and India. We’ve also worked with professional musicians from Turkey and Uzbekistan. It was really fun playing across these different traditions, and so we decided to expand our group and our musical range, and we launched the SOAS Silk Road Collective. It’s been really interesting exploring the similarities and differences in these different musics, and working out which instruments are best at playing which kinds of styles.

2- What are briefly the main styles and instruments of Uyghur music?

Although the Uyghur homeland lies within the borders of China, Uyghur music is closely related to the neighbouring musical traditions of Central Asia, and it’s very much part of the wider Islamic musical world. Singers are accompanied by the long-necked plucked and bowed lutes (tambur, dutar, rawap and satar), spike fiddle (ghijak) and the da frame drum. The singing style is very fine and ornamented, and the songs often use a kind of ‘limping’ unequal rhythm which is also found in the Sufi zikr chants that bring participants to a trance-like state. We sing traditional and contemporary songs, and the ‘classical’ Twelve Muqam. The term muqam comes from from the Arabic maqām, but the repertoire is unique to the region. I love this repertoire – it’s beautiful music, and the lyrics come from classic Central Asian poets writing in the Turkic Chagatay language, especially Ali Shir Nawa’i and Baba Rahima Mashrab. It’s deeply spiritual and passionate.

3- You incorporate dancing in your performance with Tara also donning various costumes to go along the music the group performed from that region. Is dance still widely practiced or has more modern conservative Islamic currents made this a relic of the past?

I’ve been travelling and living in the Uyghur region since 1991. Dancing is absolutely central to Uyghur social life – from traditional village gatherings to high-end weddings and parties in the major cities – everyone has to dance. There’s also a strong tradition of professional dance, which is what you see in Tara’s performance. She’s studied in dance academies in Xinjiang and in Tajikistan. In recent years there have been increasing numbers of conservative religious voices who have criticised music and dance, but the real threat to this tradition is not so much the religious conservatives as the recent government policies.

4- You mixed in poetry in short translations as well as adapting music to some of the famous poets of East Turkestan and beyond. In times when this dual art was freely practiced was it common for poetry to transition to popular music as well?

All the major Uyghur singers, such as Sanubar Tursun, set the work of contemporary poets in their songs – it gives their music greater relevance, and it helps to promote the poets and the way they are writing about Uyghur lives and Uyghur experience. This is what makes Uyghur music such a vibrant a living tradition.

5- If the invitation came and expenses were covered, would the Collective be happy to perform in other countries?

We’ve travelled quite a bit in the past, for festivals and concerts in Italy, Norway, Germany, Turkey and Taiwan among others. We hope to do so again sometime in the not too distant future.

6- One member of your team, Imogen, plays the violin. Do / did the native musicians in the region also adopt some Western musical instruments to add to the richness of its sound?

The violin has been popular in Central Asia for nearly a hundred years. You sometimes find village musicians playing it on their knee like a traditional spike fiddle. The local style of playing is unique and really beautiful, with lots of ornaments and slides.

7- Two of your members (Shotaro & Mohanish) did solo improvisations on their instruments. Is there a similar artistic tradition in Central Asia?

That’s a really interesting question. We’re sure that historically in Central Asian music, there was a tradition of modal improvisation - just like in the Arab or Turkish maqam/makam traditions today – but over the past few hundred years, the repertoire somehow got fixed. Some parts of the Uyghur Twelve Muqam, like the opening muqaddima sections do sound very much like improvised music.

8- Since conditions in East Turkestan under intense Chinese repression means any cultural expressions of the Uyghur people are banned, do you see the Silk Road Collective’s work now more important than ever, allowing for that cultural tradition to still flourish away from its homeland?

Since winter 2017 we’ve been almost completely cut off from our families and friends in the Uyghur region, but we know that many of the most famous Uyghur musicians, like Sanubar Tursun, Peride Mamut, Rashida Dawut and Abdurehim Heyit, were detained for months in the new mass internment camps that the authorities claimed were needed to root out terrorism. Many ordinary musicians have also been detained, especially those who were part of the living tradition of Sufi ritual performance. We’ve heard too many brutal stories about the regime inside those camps. Actually what we see now in the region is a form of state terror. We fear for the future of Uyghur culture, and we are very fearful for the many people still interned in these camps during the corona virus outbreak. Compared to this devastation, the voice of our group is very small, but it’s important to us to keep singing.

You can find more info and videos about the group here: / Facebook:

And you can explore Uyghur culture here:

And learn more about the current situation here: